Online Investors’ Hopes in Equities Market Receding for 2010, According to TradeKing Survey


Companies across the London Stock Exchange’s markets raised a record £63 billion in new and further issues of equity during the course of 2008, significantly ahead of the total for the whole of 2007. These strong figures, despite difficult market conditions, were underpinned by a number of substantial secondary issues throughout the year, together with key international wins which consolidated the London’s position as the international capital market of choice. There is a good IPO pipeline awaiting an improvement in market conditions.

Martin Graham, Director of Markets at the London Stock Exchange, said: “While the second half of 2008 has seen some of the most challenging IPO market conditions many of us can remember, the year has ended on a more positive note with the successful IPO of Resolution, raising £660 million. A stream of substantial further issues has continued right up to the end of the year, underlining our view that fundraising through secondary issues on our equity markets will become especially attractive in the coming year.”

“During the year we continued to outperform the world’s other major exchanges in attracting international IPOs, making very good progress in regions such as Latin America and the Middle East, where we have been less active historically. And we continue to pursue longer term prospects with the development of AIM Italia and our joint venture with the Tokyo Stock Exchange. Changes to the listing regime and the launch of the Specialist Fund Market have also increased the choice of routes to market for investment entities, and have firmly established our credentials as a leading venue for quoted alternative investment vehicles.”

73 IPOs were conducted on the Main Market, Specialist Fund Market, Professional Securities Market and AIM during the year to 15 December, raising £7.2 billion in total. The Exchange confirmed its position as the world’s most international capital market, attracting 25 international IPOs, raising £3.5 billion between them. This compared with only 13 international IPOs on the New York Stock Exchange and Nasdaq combined.

The Exchange had a very good year in the Middle East, helping eight companies from the region to raise a combined £1.5 billion on joining the Exchange’s markets. The companies included three from Kuwait and two from Qatar, including the Exchange’s first ever IPOs from those countries, as well as one each from Dubai, Egypt and Bahrain. In addition, the world’s first ETF to offer access to Kuwait, the Lyxor ETF Kuwait (FTSE Coast Kuwait 40) was admitted to trading on the London Stock Exchange’s Main Market on 29 July.

Also in May, New World Resources, a coal producer operating in the Czech Republic and Central Europe, raised £1.3 billion on the Main Market.

On 14 May silver miner Fresnillo became the first company from Mexico to join the London Stock Exchange’s markets when it was admitted to trading on the Main Market, raising £913.3 million.

KSK Emerging India Energy Fund joined AIM on 10 June, raising £101.0 million. It was one of the largest AIM floats of the year. KSK was also one of four India-based firms to float on AIM in a four week period, raising approximately £196.1 million between them.

During the course of the year, Boussard and Gavaudan, and MW Tops, which had previously floated elsewhere, both took advantage of the updated listing rules for investment entities and joined the Exchange’s Main Market in order to benefit from the liquidity and profile that a listing in London offers. 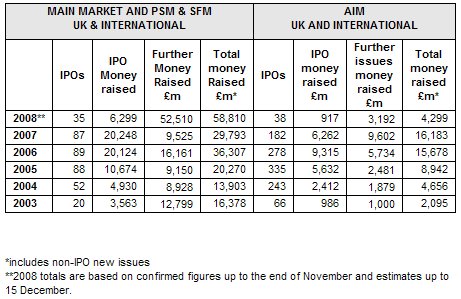